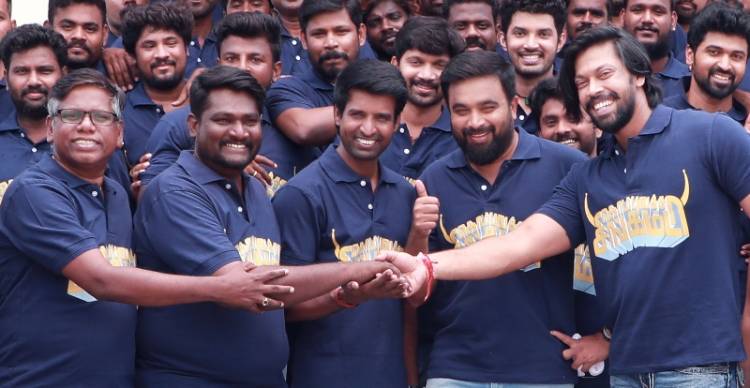 SR. Prabhakaran wraps up shooting of ‘Kombu Vecha  Singamda’. All set for worldwide release this Sep.

After the two successful outings, ‘Kutram – 23’ and ‘Thadam’, Redhan’ Inder Kumar is on a hatrick with his third movie, ‘Kombu Vecha Singamda’.

SR. Prabhakaran has joined hands with his mentor Sasi Kumar once again, at the back of his successful venture ‘Sundarapandian’.

The director has created this movie, loosely based on the sensational real life incidents that happened in the remote and small towns of Tamil Nadu between the years 1990 and 1994. With Sasi Kumar playing the lead, Madonna Sebastian plays his opposite, ably supported by Soori, Director Mahendran, Harish Perady, ‘Sundarapandian’ Thulasi, Deepa Ramanujam, Sendrayan and the producer Inder Kumar among others.

The shooting which started on 12th November at Karaikudi, has travelled through Pollachi, Palani, Tenkasi, Kovilpatti, Virudhunagar, Courtrallam has concluded at Pollachi, very much to the satisfaction of the whole team.

The cinematography is trusted with Ekambaram, music with Dhibu Ninan Thomas, editing with Don Bosco, and stunts taken care of by Anbariv. The lyrics were penned down by Yuga Bharathi, Mohanraj and Arunraja Kamaraj, while Michaelraj handles the art.  Director SR. Prabhakaran is at the helm with story, screenplay, dialogues and direction, while Nikil Murukan handles the PR responsibilities for this movie, produced by 'Redhan' Inder Kumar.

Madhavan and Anushka Shetty team up in Hollywood horror...

People Media factory and Kona Film corporation have come together to produce a first...

Actress #SaiDhanshika's Latest Casual Stills Brings Out The Charm In Her With Her...