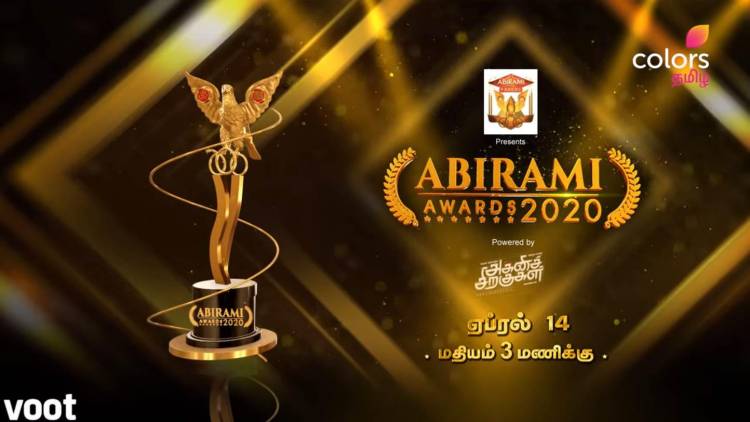 With the aim of driving your lockdown blues away and lifting your spirits, COLORS Tamil brings to you the delightful and entertaining 5th Abirami Cine Awards 2020  on the auspicious day of Tamil New Year.

The iconic awards function, a celebration of Kollywood’s most admired actors and artists, will be telecast on Tuesday, April 14, at 3:00 PM. Sit back with your family and cheer for your favourite stars as they make your day special and entertaining with their spectacular acts.

The highlight of the show are the gorgeous divas of K-town — Sakshi, Yashika and Ishwarya Dutta — who whip up a storm on the stage with their graceful dance performances as a tribute to Thalapathi Vijay, Thala Ajith and Superstar Rajinikanth.

Among the awardees, is versatile music composer, lyricist, singer, actor and director Gangai Amaran, who bags the coveted Lifetime Achievement Award for his contribution to the Tamil cinema industry.Asuran, featuring the Dhanush-Vetrimaran duo in a riveting and revengeful drama, wins the Best Film Award.

The resilient ladies from the movie Bigil are nominated for a special award called ‘Singapengal’. Comali, a feel-good entertainer about the lives of 90s kids, bags the Favourite Film of the Year Award. Oththa Seruppu Size 7 takes away the Best Director award for Parthiban.The awards event honours top comedian of the 90s, Crazy Mohan, who passed away last year, with the Lifetime Achievement Award.

Hosted by KiKi Shanthanu and Colors Vijay, the starry night also has a Russian Orchestra entertaining the audiences, with Priyanka, Sathya Prakash belting out some melodious tunes.

All the winners and their categories:

In addition to the glamorous Abirami Cine Awards, COLORS Tamil brings to you an array of movies, to be aired back-to-back, to mark the Tamil New Year.

Actress NivedhithaaSathish looks magnificent in these recent pictures of her ....