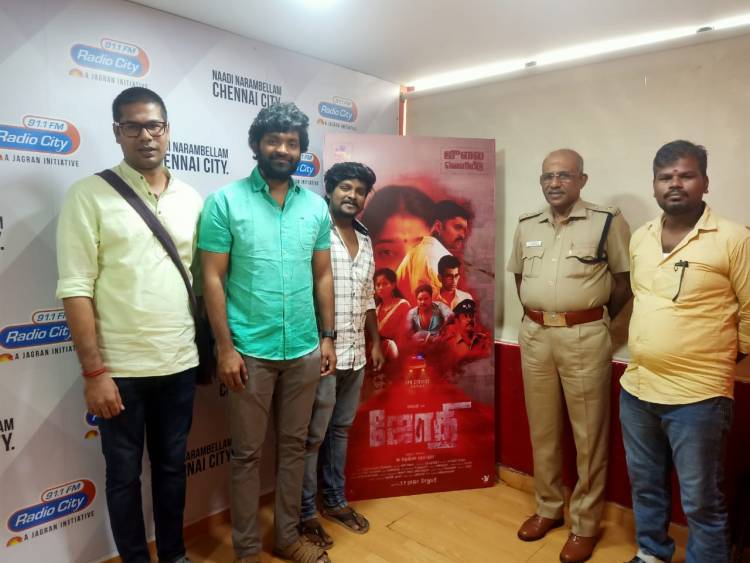 The "Jothi"  team attended a special event on Radio City FM for the second song "Ariro"  release. Police DSP , who was present at the time, lauded the film crew for keeping the mind-boggling real-life incident of child theft in Cuddalore, which is a challenge to the police, and made it into a full-length film and encouraged them to take more pictures of such real-life incidents for social awareness.

Director AV Krishna Paramatma said during the program.
Following the release of the love song "Povathenge" last week, we are now releasing the second song "Ariraro" which is about the relationship between father and daughter. The song is beautifully composed by Harshavardhan Rameshwar, lyrics by Karthik Netta and voice by Balram Charoda. There is no doubt that this song is set to be heard over and over again by fathers who have had children and children who admire dads. The film is a solution to a specific social problem and is very emotional and thriller. Everyone who casts their eyes upon it, wants a go. This has given me great hope and will definitely win. ”

The Hero "Vetri" Said.
"8 Thottakkal is an extension of the film. The reason is that I lost my pistol in that picture and will wander in search of it, this picture will wander in search of the child who was stolen from a pregnant woman. When I heard the script for this film, the script was good, but I remembered how to make a new team, and I was shocked when I went to the shooting spot and saw the making style there. Very experienced team. Full confidence in TEAM. Thirty days and nights ended up being taken in the same SCHEDULE day and night. I saw the audience review video sent by the producer. I hope this film goes everywhere on the menu and earns me the love of mothers. ”

Lyricist "Karthi Netha" said.
“I was shocked when the director first told me the story. I finished writing the song in ten minutes because I got the steps in the same feeling he said. I have written three songs for this film. I was living like the dad character in this "Ariro" song. My baby was two months old when I was given the opportunity to write this song.

Composer "Harshavardhan Rameshwar" said.
"So far I have only done background music for all the films I have made music. First time I did the whole album with the background music of the torch film. At first, the film came to me without a song. After watching the film I thought the director had taken the film very emotionally. I thought it would be great if I could give some of that feeling through the song. The producer also agreed regardless of cost. We took all the songs to live and Jesudassar sang the song that came in the climax. What he said would have been a boon to us. Its impact was the same, it took a long time to recover from that.

Producer "SP Rajasethupathi" said.
“The essence of this film is the real incident that took place in my hometown Cuddalore. The incident at the Government Hospital and the background of the investigation was very emotional. AV Krishna Paramatma, who studied in film college, handles the emotional script well and I deserve it in the short film he directed. So I believed he was right to film this incident. DSP Shanthi met them and started researching the data. The same vibe that was present in this incident is given in the commercial full-length film. The impact of this incident has reached the audience who saw the film in the foreground. They pleaded that more films like this should come out. The first film I worked on as a cinematographer was a case in which a judgment was given in the Chennai High Court citing the film Chess Hunt. So it satisfies me that the audience told me that I was determined to take pictures of such social problems. "Jothi is coming out in July. Everyone should come with their families and see us in the theaters and give us great support," he said.

Birthday celebration of @JiivaOfficial from the sets of...