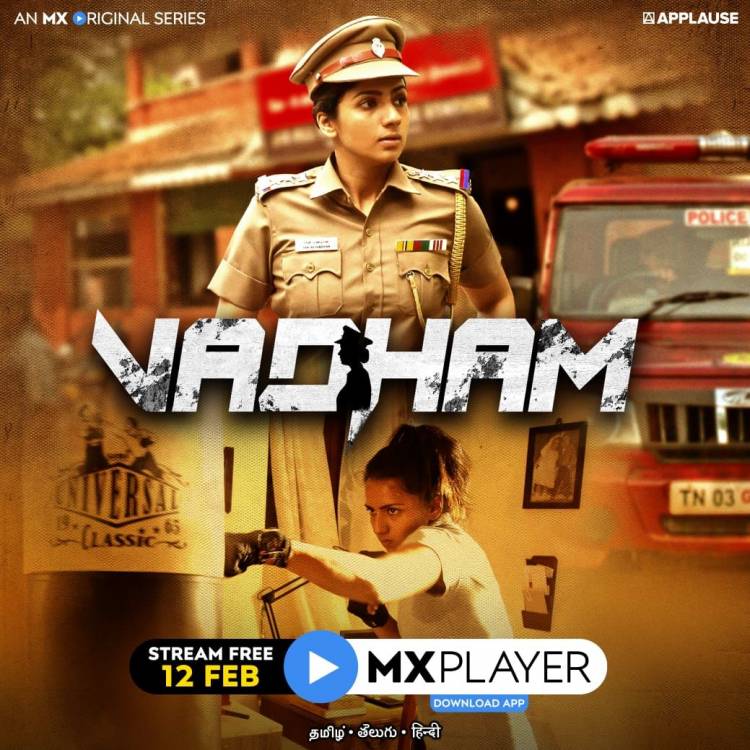 This  first of its kind female cop drama series stars Sruthi Hariharan in the lead and will stream for FREE, starting 12 February

Chennai: 9 February 2021 – IPS Officer Sakthi Pandiyan is bright, focused and strives for excellence at work, with a deep and ingrained belief that justice must be delivered. And it is the story of this first of a kind female cop that MX Player brings viewers this weekend, in the high octane drama – MX Original Series – Vadham.

Starring Sruthi Hariharan in the titular role as Inspector Sakthi Pandian – she is determined to solve the murder of an influential businessman alongside an ‘all-women’ task force. The truth that she unravels as she digs deeper into the case tests her limits in ways unimaginable. As a woman officer, she faces oppression and threats in her fight against the system and against powerful politicians but her unwavering sense of responsibility pushes her to ensure that justice is met. The 10 episodic series is produced by Applause Entertainment in association with Tasa Media. The show is written and directed by Venkatesh Babu and will stream for FREE on MX Player, starting 12 February.

Speaking about the show, its writer/ director Venkatesh Babu said, “This high intensity drama, spearheaded by a determined female police officer makes for a perfect binge watch session for audiences who enjoy solving crime mysteries. The story revolves around Sakthi Pandiyan, a young, fierce and idealistic police officer - who goes to the extent of even breaking the law to ensure that justice is served. Sruthi Hariharan has truly brought alive the character of Sakthi and everyone on the show has worked extremely hard to make this series a compelling watch."

Elaborating on what appealed to her the most about this role, Sruthi Hariharan said, “As an actor, I've always selected roles that are challenging and don't always cater to convention. In Vadham, I personally related a lot to Sakthi Pandiyan as a character, who fearlessly fights for what is right and is determined to solve the murder of an influential businessman. Playing this role also involved intense action sequences and the process of shooting for it was both exciting and tough to master. The immense support shown by our director, Venkatesh Babu, is what helped me ace my character. I hope our hard work and dedication brings a lot of thrill and joy to the audience and viewers of Vadham".

Stay connected with us on:

MX Player is an entertainment super app that caters to over 200 million Monthly Active users in India, integrating all forms of entertainment on one platform – including video playback, streaming video, music and gaming. Defining “everytainment” for viewers with entertainment that suits every mood, it currently operates on an ad supported model and hosts a wide library of over 2,00,000 hrs of premium content across 10 languages, including a critically acclaimed slate of MX Original/ Exclusives, movies, web series, TV shows, news and audio music. The app is available across Android, iOS, Web, Amazon Fire TV Stick, Android TV and OnePlus TV amongst others.

Having launched its gaming feature in February 2020, Games on MX Player has grown exponentially and this tournament style slew of hyper casual mobile games is now available across its Android and iOS apps.

From the stable of Times Internet (the digital venture of Times of India, India's largest media and entertainment group), MX Player has now spread its footprints across 12 markets including UAE, US, Canada, UK, Australia, New Zealand, Bangladesh, Nepal, Afghanistan, Srilanka, Maldives, and Bhutan.  MX has further expanded its business with the launch of its short format video app MX TakaTak - a home-grown platform that offers a wide variety of short form content and creation tools across genres that is home to the largest number of 15Mn+ digital influencers as well as MX ShareKaro that is an easy-to-use file sharing app with rapid transfer speed.

Packing a Punch in Theaters near you on 9th September,2021!

Young and aspiring talents, here's a platform for you to...

Young and aspiring talents, here's a platform for you to reach out and achieve your...

Actress #Anika definitely steals our heats in the beautiful...