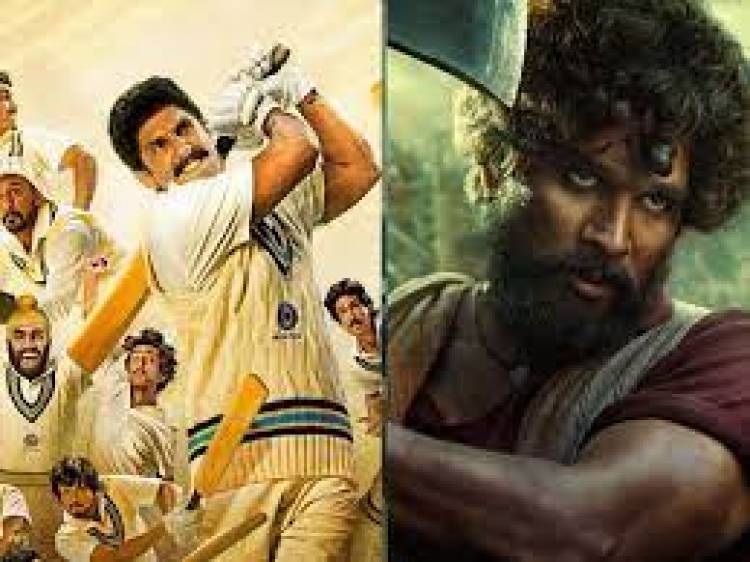 Allu Arjun starrer ‘Pushpa’ Hindi is giving some tough competition to Ranveer Singh’s sports drama ‘83’. Both the films are in the race for the 100 crore club. For a South film dubbed in Hindi, ‘Pushpa’ has emerged as a huge success. On its fourth Saturday at the box office, the film collected around Rs 2.50 crore nett. According to boxofficeindia.com, ‘Pushpa’ Hindi continues to make decent business and now stands at a total of Rs 76 crore nett.

Ranveer Singh starrer sports drama ‘83’ (Hindi) added around Rs 1.25 crore nett to its collection on its third Saturday. The film reportedly stands at a total collection of Rs 94 crore nett. For a comparison, on Saturday ‘Pushpa’ Hindi earned Rs 2.50 crore while ‘83’ raked in Rs 1.25 crore nett. ‘83’ has not recorded much growth in the past one week. While both the movies are heading towards a total of Rs 100 crore, it remains to be seen if they will achieve the number as theatres across the country are shutting down and new restrictions are being implemented.
‘Pushpa’ is originally a Telugu-language action drama, which has been released in Malayalam, Tamil, Kannada, and Hindi languages. Starring Allu Arjun, Rashmika Mandanna and Fahadh Faasil in the lead, this entertainer is written and directed by Sukumar. While ‘83’ is directed by Kabir Khan and features Deepika Padukone, Pankaj Tripathi, Tahir Raj Bhasin, Jiiva, Saqib Saleem, Jatin Sarna, Chirag Patil, Dinker Sharma, Nishant Dahiya, Harrdy Sandhu, Sahil Khattar, Ammy Virk, Adinath Kothare, Dhairya Karwa and R Badree in pivotal roles.

‘Super Sharanya’ movie review: Campus drama does not live up to its name

Super excited to announce that the #KondaMela video song...

Super excited to announce that the #KondaMela video song of #NammaOorukuEnnadhanAchu.........

Happy to reveal the film title #TheNight for #GoodHopePictures...

#VVPressMeet Here's @TheVishnuVishal who is meeting the press this afternoon. ....