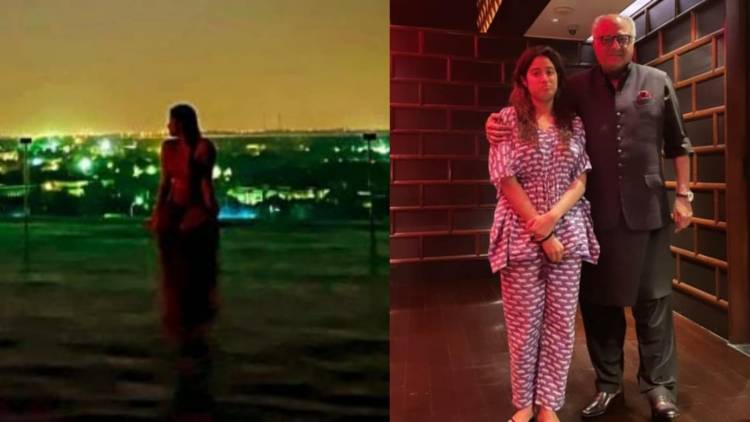 Janhvi Kapoor took to Instagram to share pictures of herself from her recent night out. The actor took a dip in the pool and posed with her dad, Boney Kapoor.

Janhvi Kapoor took to Instagram Stories and shared a picture of herself enjoying a swim at night. The actor, in the picture, slipped into her swimwear to take a dip in the pool.

The picture, taken from a distance, featured Janhvi lost in thought as the city lights doubled up as her background. She shared the picture with no caption and did not reveal details of her current whereabouts.

However, in the following story, she did reveal she was accompanied by her father, producer Boney Kapoor. In the picture, Janhvi posed with her father with a frown on her face. While she dressed casually, Boney was prepared for a formal gathering. Sharing the picture, Janhvi said, “When you don't get the dress code memo,” along with an upside-down smiley.

Janhvi has been spending time with her friends and family lately. Last week, she took a trip with her friends. She shared pictures from the trip, revealing that the group had trekked through a forest, enjoyed a dip in a stream and even visited a temple.

During the trip, Janhvi also got herself inked. She tattooed the words, ‘I love you my labbu’ on her arm. The tattoo appeared to be a nod to her late mother, actor Sridevi. On Sridevi's third death anniversary this year, Janhvi had shared a note written by her on Instagram. It read, “I love you my labbu. You are the best baby in the world.”

Janhvi was last seen in the horror-comedy Roohi. The film also starred Rajkummar Rao and Varun Sharma. She will star in Good Luck Jerry next. It marks her first collaboration with filmmaker Aanand L Rai, who is producing the film. Good Luck Jerry was shot in Punjab and she wrapped up the filming in March this year. Janhvi also has Takht and Dostana 2 in the pipeline, both under Karan Johar's Dharma Productions banner.

The magical melody #Srivalli from #PushpaTheRise will be a lovely addition to your...