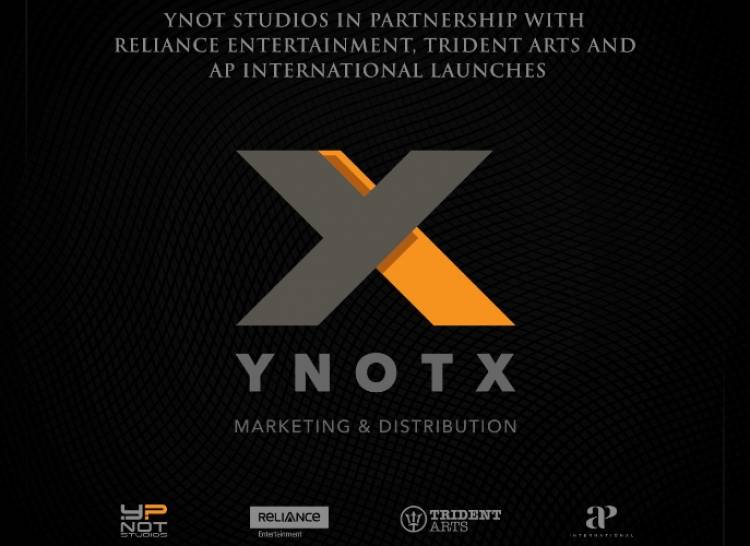 Chennai, February 20, 2019: YNOT Studios, Reliance Entertainment, Trident Arts and AP International are coming together to form “YNOTX Marketing & Distribution”, which will be an extensive worldwide film marketing and distribution network service for regional movies. It will mark the beginning of an exciting partnership between some of the most creative and commercially successful, dynamic and influential names in the business.

S. Sashikanth, YNOT Studios said - “YNOTX endeavours to create a unified platform for distribution and sale of content-driven regional movies, which will eventually help create a more sustainable model for such films to thrive in what will be a volatile future for the movie industry. We are building an in-house team to seamlessly integrate Advertising, Marketing & Distribution of films and create unified ecosystem for the producers to connect with various partners in theatrical and digital distribution of their content, which will help them to maximise their revenue potential.

Shibasish Sarkar, Group CEO Reliance Entertainment added- “Many regional production houses are struggling to find the right platforms to deliver their content to their target audience, because there are few options, and too many eyeing for the same niche space. Further compounding the problem is that there is no clear platform for such producers to engage with the last mile players at an incubation stage, which leaves the production houses very vulnerable at the time of release. YNOTX is a great platform to battle this issue and ensure a more healthy model is practised in the marketing and distribution scenario of regional films.“

R. Ravindran, Trident Arts added - “From the highly fragmented and disconnected nature of the current movie business ecosystem, it is very easy to ascertain that there is an imbalance in the supply & demand chain and this presents an opportunity to come up with a solution in the form of a combined effort of individuals who are well experienced and very capable in their own domain.”

Sanjay A. Wadhwa, AP International remarked - “The various distribution platforms are also struggling to have a qualitative process of engaging with these creators to find the right content that matches with their requirement, because of the sheer number of players that are involved, and also the qualitative variables that are involved in each project. This lack of clarity and disconnect with the process of content creation at an inception stage, leaves them with no choice at the time of procurement and are forced to take a punt rather than a more informed choice, in terms of the quality of the end product. YNOTX will enable better consumption of a lot of unconventional regional films high on quality and content, and their makers. “

Mr.Kishore Tallur, who has had 12 years of extensive experience in the Film Distribution business will be heading Distribution at YNOTX.