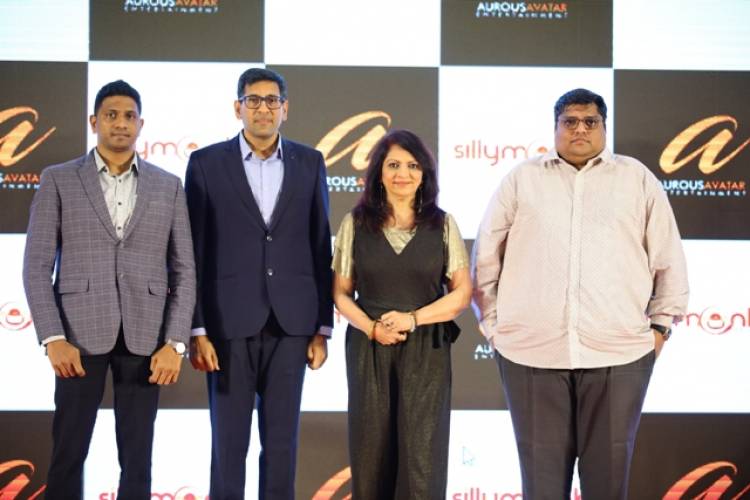 National , 18th July 2019 :  With four successful film releases in Marathi, Gujarati and English, the Mumbai based production house Aurous Avatar Entertainment is now eyeing the Telugu audience. Founded in 2013, Aurous Avatar has joined hands with the Southern Entertainment juggernaut Silly Monks Entertainment, known for their content production, marketing and syndication, with a shared vision of creating relatable productions to the film goers across the country. Taking the first leap of faith in the Southern market, this joint venture is almost ready with its maiden release, Ashwamedham.

There are exciting projects to be expected from this unique team of Aurous Avatar and SillyMonks in the upcoming months with three new productions in the pipeline apart from Ashwamedham – a second Telugu film Dipawali, Nanhe Einstein in Hindi and Dadar 1992 in Marathi.

This could well be the beginning of a film conglomerate that traverses the length and breadth of the country geographically as well as linguistically as an amalgamation of strengths in the fields of production, distribution, movie promotions, digital marketing & syndication in a manner that not only complements one another. Together they are set to embark on a journey to provide wholesome entertainment to Indian cinema.

RupeshGugale (Jain) echoed his sentiments saying, “It is an honour to serve the regional market in south and this strategic partnership with SillyMonks is the best thing that could have happened to Aurous Avatar in recent times.”

ShubhMalhotra, partner in Aurous Avatar feels the same, “Being a Mumbai based company, it would not be easy for us to venture into the Southern market without this partnership with Silly Monks.”

Sanjay Reddy, Founder & MD of Silly Monks is extremely optimistic about this joint venture as this gives SMEL an opportunity to become a full-fledged film production house on the lines of Yash Raj Films with marketing & distribution under their belt. Sanjay furtheradded, “This collaboration allows us to enter new markets like Bollywood and other regional production spaces like Marathi & Gujarati too. We see this as a giant leap for Silly Monks as a company keeping our promise when we went public in January 2018, having been the first digital media entertainment company to be listed on NSE Emerge. The past year has seen us restructure our vision and revisit our goals and we now know we are ready to put it all in place, as envisaged”

Check out the official trailer of upcoming Tamil movie TorchLight............

Anirudh spreads out ‘Rap’ mania with Ghibran for “Sixer”

Anirudh becomes synonymous symbolic for any musical genres. It isn’t simply for...

Kamal Haasan talks about the idea behind the naming of his Youtube channel and also...