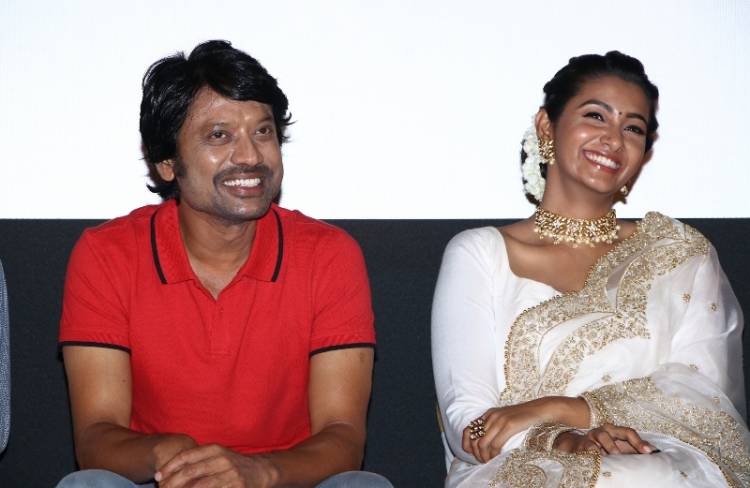 Following the remarkable movies like Maaya and Managaram, Potential Studios LLP is producing Monster they stars SJ Suryah and Priya Bhavani Shankar in lead roles. With the film hitting screens on May 17, the audio launch of this movie was held this morning at Sathyam Cinemas , Chennai.

Speaking on the occasion, Shankar, Dialogue writer and co-writer said, “Nelson Venkatesan might be a student to me, but I learnt lots of things from him and it was not just from him, but the entire team. There are two heroes in the film and I am sure everyone will enjoy watching it.”

Art Director Shiva Shankar said, “The efforts of cinematographer and director are remarkable and everyone will definitely appreciate it.”

Editor Sabu Joseph said, “I have already worked with this team in Oru Naal Koothu. I have been so much confident about the working nature of Nelson Venkatesan and in this film, he had upgraded himself. SJ Suryah sir has done a colossal work as most of the shots would involve the imaginary suggestion shot due to the presence of mouse. I am sure kids and family audiences will thoroughly enjoy the film.”

Cinematographer Gokul Benoy said, “ Monster is a script that gave me whole lots of scope for me to handle camera in unique manner. Everyone in the team were completely equipped with so much of efficient work. Especially, the involvement of producers Prakash Babu sir, SR Prabhu sir and Thangam Prabhakaran sir were incredible.”

Choreographer Santhosh said, “Choreographing the song that we saw now was really different from what I have done earlier. It has the concept of kids appearing as mouse. SJ Suryah sir used to give lots of inputs and it escalated the essence of song.”

Music Director Justin Prabhakaran said, “The entire team had a good wavelength from the time we worked together in the film Oru Naal Koothu. The whole star cast has done a wowing job and now while scoring BGM, I am coming across the hard work of entire
team. SJ Suryah Sir’s passion for cinema is outstanding.”

Actress Priya Bhavani Shankar said, “First time, when I had Nelson approaching me with the script, I was quite doubtful whether I would be appropriate for the role. Initially, I was even afraid of SJ Suryah sir as his assistants would tell me how tensed he is. But he was super cool on the sets and the whole moments with him was literally elating. Nelson is so much focussesd on what he wants and it involving lots of learning experience. I have seen the film during the dubbing and I am so happy about the way it had turned to be.”

Director Nelson Venkatesan said, “I am grateful to my mother for being a pillar to my dreams and the next person to thank is none other than Kenanya Films Selvakumar sir for giving me the right opportunity. Finally, I would like to thank the entire team of production for being so much supportive. When I started the script, the major point was SJ Suryah is Hero and Mouse is villian. Rats have played a major role in human kind across the centuries. In one of the articles, I came across a research saying that the total volume of rats if they decide can eat and kill the entire human population. When I narrated the script to SJ Suryah sir, he was so much interested in the project and then it was Priya Bhavani Shankar, who wanted the script to be given to her before shooting. Such have the proficient people who have been a part of this film. There have been times when SJ sir has to shoot individually and it really needs a good patience to be an actor of this sort. The entire technical crew is yet another boon to me as they have been giving their inputs respectively. Even when I would settle down with my works, they would never compromise and would consistently keep working to deliver the best. I would like to make it clear that all the shots involving rats are original and they are not made on CG. We wanted to show SJ Suryah sir in a much new dimension and fresh looks. Unlike many actors, he is someone who keeps repeating the takes with double energy.”

Actor SJ Suryah said, “I personally feel that there is a good blessing for the entire film and there are lots of sweet magic in this film. The real hero of the film is producers at Potential Studios. The way they respect and value their staffs and team is remarkable. I come across the facts that Aamir Khan would have a team that works constantly in choosing good scripts and they are here as same. Monster is a breezy film that has lots of magic, Producer Prabhu sir told me that Nelson in a sincere person and I felt it wholeheartedly. There’s a deep connection between the humans and animals. There were times when I would tell everyone on the sets that it’s best to go for the CG for the shots involving rats. However, they wanted to feel the skin completely and didn’t compromise with it. I would often tell Priya Bhavani Shankar that she has all the qualities like Vidya Balan in Munna Bhai MBBS and will definitely happen soon. There has been lots of love and care about that were prevalent on the sets and I am really sure audiences will completely enjoy watching it. The hit or flop results don’t matter to me, but the magical moments. Moreover, this is the first ever time my film is getting U certificate. The speciality about the film is that everyone looks so simple, but are magical.

Producer SR Prabhu said, “Many have been asking us if we have some sentimental connect with the titles starting with M. Well, making good quality films is what we desire. Like everyone, even I too have a worst moment with rats. Initially, I was asked to watch Oru Naal Koothu and felt that it had lots of breeziness. So we decided to make this film and it is now Monster. The protagonist of this film is a devotee of Saint Vallalar and he doesn’t harm even a single insect, but the situation forces him to decide whether to kill the rat or keep it alive. We have seeing SJ Suryah sir as monster and to have a rat posing as monster to him propelled me to make this film. We are scheduling the film for release on May 17. My team at Potential Studios has been completely supportive throughout the process.”

Ravishing @RaashiKhanna paired opposite to Bollywood Star @shahidkapoor for an OTT...