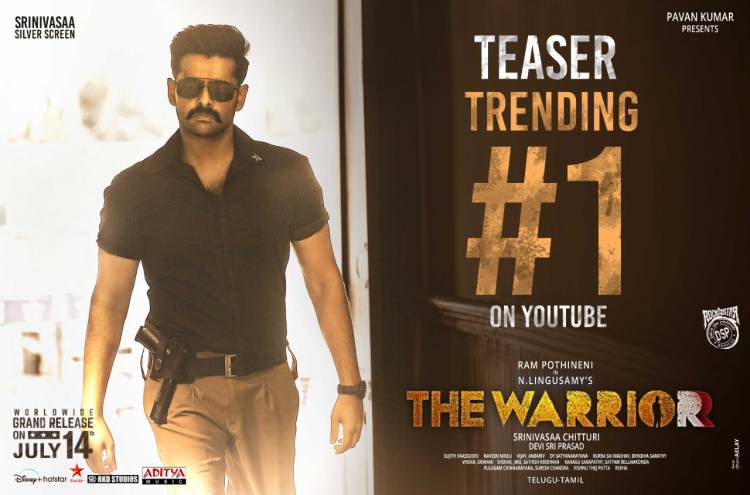 The makers of The Warriorr today elevated expectations to a whole new level with a massive teaser that took the excitement on the spectacular combination of Ram Pothineni and N Linguswamy to new heights.

This is the birthday gift for RAPO fans from The Warriorr Team, as the actor's big day falls on May 15.

Ram Pothineni is ramped up in Cop avatar, while Redin Kingsley's elevation in the background heightens the suspense of the mighty SATYA IPS gutsy entrance. Ram Pothineni has completely transformed to fit the cop role. He has done his own dubbing in Tamil & the Tamil audience are sure to enjoy his mass dialogue delivery in Tamil.

Aadhi Pinisetty appears cursorily in the teaser and encapsulates the eye with his rugged look. Whistle Mahalakshmi 'Krithi Shetty' amazed everyone with her energy as usual. The effervescent background music delivered by Rockstar DSP elevates Ram pothineni as Satya to another level.

The teaser boasts breathtaking visuals by 'Sujith Vasudev’ and adrenaline-pumping action by ‘ Vijay’ & 'Anbariv' fight masters. The massy teaser implies that the cop is on his way to confront anti-social elements. The Warriorr team gave ustaad RAPO fans a weekend treat.

The Warriorr starring Ram Pothineni is among the eagerly expected movies for many reasons. For, the young Telugu actor has partnered with ace director N Lingusamy for the first time and this film, a bilingual, will mark Ram's debut in Kollywood.

Also, it will show Aadhi Pinisetty in a hitherto unseen role of a strong villain.
It is to be noted Lingusamy is known for his action entertainers. The film has a stellar star cast with Krithi Shetty as the heroine (her name is Whistle Mahalakshmi).

The Warrior is being produced on a high budget by Srinivasaa Chitturi under Srinivasaa Silver Screen banner. Pavan Kumar will be presenting the movie.